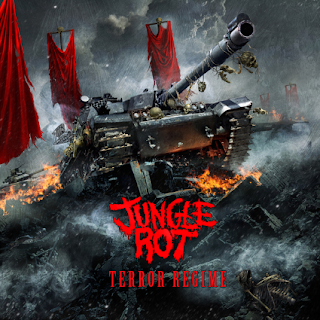 Earlier this year, Jungle Rot´s 1996 album "Skin the living" was re-released in a remastered version by Victory Records and in March, their 8th studio album "Terror Regime" is unleashed. The new album is their 2nd for Victory Records and is said to be their most aggressive album to date, the combination of deathmetal and oldschool thrash works really good and my thoughts go directly to bands like Slayer, Def Con One and Shadows Fall. The best tracks are at the beginning of the record with "Voice your disgust", "Utter chaos" and "I am hatred". The tracks at the end of record are shorter and a bit punk-ish, they even do a cover of punk/thrash band D.R.I´s "I don´t need society". Expect no compromises on "Terror regime", this is real metal with razorsharp guitars and furious vocals. They might not beat Slayer at their homefield but Jungle Rot ain´t far behind.
Upplagd av RothNRoll kl. 7:27 PM