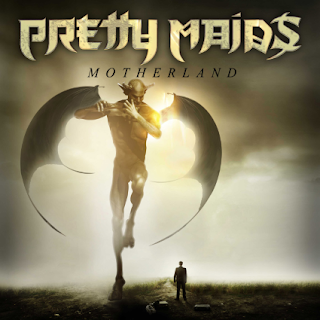 Pretty Maids - Motherland (2013) Frontiers Records
Produced by Jacob Hansen
HARD ROCK
Tracks : 1.Mother of all lies 2.To fool a nation 3.Confession 4.The iceman 5.Sad to see you suffer 6.Hooligan 7.Infinity 8.Why so serious 9.Motherland 10.I see ghosts 11.Bullet for you 12.Who what where when why 13.Wasted
www.prettymaids.dk
3 out of 5

The only two original members left in Pretty Maids, singer Ronnie Atkins and guitarist Ken Hammer are still going strong and show no signs of slowing down. Their 13th studio album "Motherland" sounds a bit like "Pandemonium II", their previous album "Pandemonium" from 2010 was a classic Pretty Maids album with plenty of strong tracks and the band must´ve felt they shouldn´t take any chances with the new album. However, "Motherland" feels a bit safe where the major part of the tracks are less heavy metal with the band going all melodic. That should probably mean only positive things since their melodic songs before have been smashes, and I do dig a few tracks here quite a lot like the single "Mother of all lies", the pumping "Hooligan" and the AOR-ish "To fool a nation". But this album just don´t give me any goosebumps, the production is huge and lots of fans will probably love it so what´s wrong then? Nothing really, I give the album 3 stars out of 5 so it´s definitely worth £10 but it´s not one of their best albums either.
Upplagd av RothNRoll kl. 12:00 PM