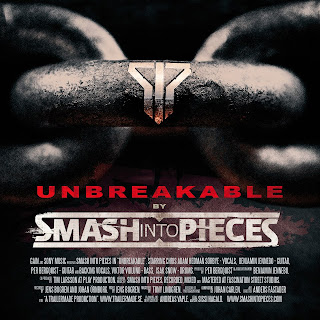 Smash Into Pieces - Unbreakable (2013) Gain / Sony Music
Produced by Per Bergquist
HARD ROCK
Tracks : 1.Colder 2.Heroes 3.A friend like you 4.Crash and burn 5.Here to stay 6.Unbreakable 7.Rockstar 8.Come along 9.I want you to know 10.My enemy 11.Fading
www.smashintopieces.com
4 out of 5

I´m proud of this band from my hometown of Orebro, Smash Into Pieces have struggled real hard to get their music out on a major label and finally their debut album "Unbreakable" will be released in April. The wait is over because fans have been dying to get a copy of their first album for years, I first saw this band live at Yeah Festivalen in 2010 and they impressed me so much. Those who have followed this band from the start will recognize a few tracks from their promo EP in 2010 such as "Rockstar", "Crash and burn", "Here to stay" and the debut single "Fading". They are re-recorded here and sound way better. The album opens with the new single "Colder" that is conquering the charts in Sweden, don´t be surprised if SIP will get a Grammy for best hard rock album in 2014. They are already winners of the breakthrough band at Bandit Rock Awards and Millencolin Music Prize this year, well deserved too because when you hear new songs like "A friend like you", "Heroes", "Unbreakable" and "My enemy" - you know we´re dealing with big rock here. I won´t be too surprised if the title track will end up as the WWE anthem of 2013.
Upplagd av RothNRoll kl. 11:10 AM