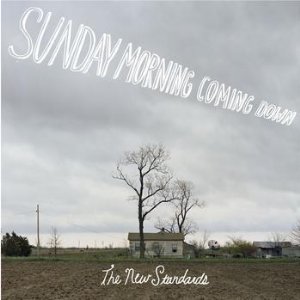 The New Standards - Sunday morning coming down (2012) Princess Records
Produced by The New Standards / Dan Wilson
ALTERNATIVE JAZZ
Tracks : 1.Sunday morning coming down 2.This must be the place 3.Call your boyfriend 4.I scare myself 5.Essence 6.No cars go 7.After the gold rush 8.The golden age 9.And I love her 10.The book of love 11.One 12.You´re innocent when you dream
www.facebook.com/thenewstandards
2,5 out of 5

The trio The New Standards released a nice covers album back in 2008 called "Rock and roll" where they did jazz versions of old punk and new wave songs, this time with the new record "Sunday morning coming down" they´re re-discovering 60´s songs as well as modern pop hits. TNS ain´t your average jazz band, sure you could label them as lounge music but this is really cool jazz. They like to play songs from different genres such as country, pop, alternative and classic rock. I´m not that fond of the bossanova song "Essence" by Lucinda Williams but I am more pleased to hear great versions of "Call your boyfriend" by Robyn, "No cars go" by Arcade Fire and "After the gold rush" by Neil Young. Thumbs up. We also get ok covers with "The book of love" by Magnetic Fields, "One" by Three Dog Night and "Sunday morning coming down" by Kris Kristofferson. Other artists covered are Beck, Talking Heads, The Beatles, Dan Hicks and Tom Waits.
Upplagd av RothNRoll kl. 4:55 PM