Fathom Lane - Down by half 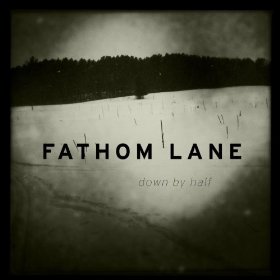 Fathom Lane - Down by half (2012) Longplayer Records
Produced by Michael Ferrier / Zachary Hollander
ALTERNATIVE COUNTRY / FOLK
Tracks : 1.Hope you never 2.Snowbride 3.Sweet sept 4.Prayer w/o words 5.Miles 6.Naked in the grass 7.Ghost of me 8.Moving 9.Wandering star
www.facebook.com/FathomLane
2 out of 5

The dark album cover of Fathom Lane´s debut "Down by half" suits the music just fine, it feels like I´m walking alone down an empty road in late October when I´m listening to this album. Although Fathom Lane is a full band, the music centres around singer/songwriter Michael Ferrier and Ashleigh Still on vocals/piano. We´re talking moving music here that ain´t entirely a country record, the listener gets a dose of folk and indie pop as well. They do a cover of Polica´s "Wandering star" which fits in well with the rest but no matter how much I´m trying to understand Fathom Lane´s sound, it just doesn´t move me. There are a few ok songs though like "Snowbride" that bring thoughts to Simon and Garfunkel and "Ghost of me" that can be described as Johnny Cash meets Radiohead. I wonder if not the band´s leader Michael Ferrier is a huge fan of Sigur Ros? I can sense some Icelandic vibes in this record.
Upplagd av RothNRoll kl. 8:01 AM