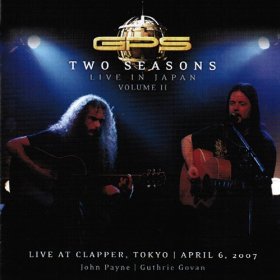 GPS but without the S, Guthrie Govan and John Payne performed their GPS album "Window to the soul" unplugged live in Tokyo on April 6th, 2007, but without drummer Jay Schellen. If you want the full band version you can get Volume 1 which was released in 2012, I haven´t seen or heard that live CD/DVD but I guess it´s better than this acoustic concert. I was bored halfway through the set and then just counted minutes for it to end, feeling like a prisoner in isolation waiting to get out in daylight. The studio album from GPS wasn´t exactly good from the start so to hear these mediocre unplugged versions feels like torture, not even the ASIA songs "Military man" and "The longest night" gets a nice treatment from Payne and Govan here. Although I admit Guthrie is a great guitarist, he cannot save these versions from Payne´s agonizing voice. Not to mention the quality of the DVD, it´s horrendous. It looks like a low budget film with bad audio.
Upplagd av RothNRoll kl. 12:31 PM