The Bunny The Bear - Stories 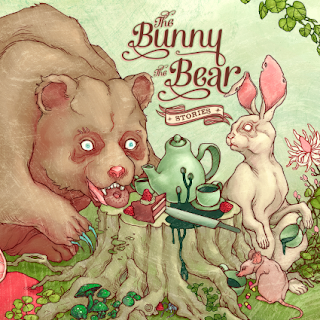 The Buffalo duo The Bunny The Bear does not make children´s music, you might get that idea when you see the album cover of their new album "Stories". But you can file them under bands that wear masks because one has a rabbit mask and the other one, a bear mask. The men behind this band are Matthew Tybor and Chris Hutka and they keep releasing albums steady one per year, their debut came out in 2010 and this year their 4th album "Stories" is released. The Bunny The Bear blend screamo with dance rhythms, catchy choruses and a huge portion of distorted guitars. "Stories" is a solid album that grows for each time I hear it, the single "In like Flynn" could´ve been an unreleased Fall Out Boy song. I love it. Another contender for the airwaves is the pop punk song "It´s not always cold in Buffalo", and speaking of pop punk, the song "Another day" bring thoughts to Tom DeLonge´s Angels and Airwaves. Cool!
For fans of Issues, I See Stars, Palisades
Upplagd av RothNRoll kl. 8:36 AM