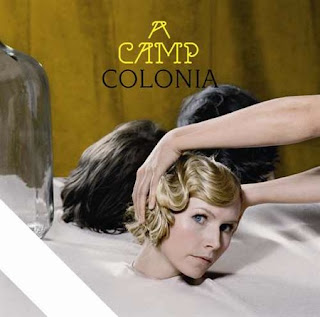 A Camp - Colonia (2009) Universal Records
Produced by A Camp
INDIE POP
Tracks : 1.The crowning 2.Stronger than Jesus 3.Bear on the beach 4.Love has left the room 5.Golden teeth and silver medals 6.Here are many wild animals 7.Chinatown 8.My America 9.Eau De Colonia 10.I signed the line 11.It´s not easy to be human 12.The weed had got there first
https://myspace.com/acamptheband
3,5 out of 5

Some albums grow from small to giant size within days, I never really cared for The Cardigans before but their lead singer Nina Persson sound so much better in A Camp.
They won 4 Swedish Grammys for their first album from 2001 and now they´re back with the 2nd album "Colonia". We can also find Nina´s husband Nathan Larson and Atomic Swing leader Niclas Frisk in the band, there are also guest appearances from James Iha (Smashing Pumpkins) and Mark Linkous (Sparklehorse) on "Colonia".
You might remember the 2001 hit "I can buy you" which is pretty nice but the new single "Stronger than Jesus" is even better, I think romantic pop is a good description of their sound. The last 4 tracks aren´t on the same level as the other songs which is holding me back from giving this album more than 3,5 stars.
But songs like "The crowning", "Love has left the room", "Here are many wild animals", "Chinatown" and "Golden teeth and silver medals" are nothing but excellent.