A Change of Pace - Prepare the masses 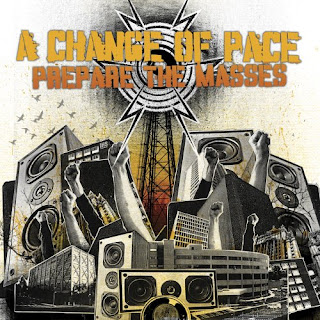 A Change of Pace - Prepare the masses (2006) Immortal Records
Produced by Michael Baskette
EMO
Tracks : 1.Prepare the masses 2.How to rape a country 3.I´m alive 4.Shoot from the hip 5.Weekend warriors 6.White lines and lipstick 7.A song the world can sing out loud 8.Take care 9.War in your bedroom 10.Recipe for disaster 11.Safe and sound in phonelines
www.facebook.com/achangeofpacemusic
4 out of 5

Want a tip of a great emo/metal album with supermelodic choruses in the punkpop vein?! Then the answer is the new album from A Change Of Pace. I thought their debut was strong but this one is even stronger, "Prepare the masses" takes the band in the right direction to the stadium rockband they rightfully deserve to be. These guys grew up listening to Story of the year and Taking Back Sunday, now they´re just as good and could very well start headlining upcoming tours if this one start selling which I hope it will.
It´s time to put A Change of Pace on the map of emo for good, I can imagine how big the awesome "I´m alive" can sound in any arena. The catchy "Weekend warriors" should conquer the airwaves on radio if there´s any logic in it, the opening track "Prepare the masses" is as massive as a caravan of trucks heading your way. 46 minutes you want to hear over and over again so upload your iPod´s now - you won´t regret it!