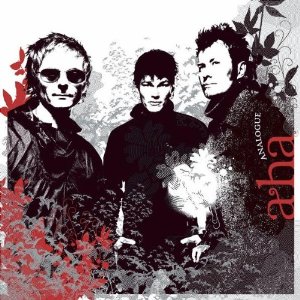 A-ha - Analogue (2005) Universal Records
Produced by Martin Terefe / Kjetil Bjerkestrand
ELECTRO POP
Tracks : 1.Celice 2.Don´t do me any favours 3.Cosy prisons 4.Analogue 5.Birthright 6.Holy ground 7.Over the treetops 8.Halfway through the tour 9.A fine blue line 10.Keeper of the flame 11.Make it soon 12.White dwarf 13.The summers of your youth
http://a-ha.com/
3,5 out of 5

The 8th studio album from the Titans of Norwegian popmusic comes out 20 years after the breakthrough with the hitsingle "Take on me" taking over the charts around the world. I have always been weak for A-ha´s beautiful melodies and Morten Harket´s sensual voice, songs like "Manhattan skyline","I´ve been losing you" and "Hunting high and low" are nothing but pop classics.
It´s hard to understand how big they are in their homecountry but they played in front of the largest crowd ever in Norway this summer where 120,000 came to see this legendary trio.

So how does "Analogue" sound then? Well,you could say the band has taken a slightly new direction soundwise with a more melancholic and atmospheric touch to their already unique A-ha sound. Most songs on the new album are written on piano and acoustic guitar, synthesizers has a more hidden role on "Analogue" but Harket´s characteristic voice gives these songs the special trademark that their fans have learned to love during 2 decades. It almost feels like listening to music to a sad ballet in some moments, the first single "Celice" is a cold but passionate uptempo track and the first obvious choice for a radio release.
The title track "Analogue" might be the second song to be released on single, it contains a 10 points chorus that echoes smash hit all over Hardangervidda.
Other songs that belongs on the next best of compilation with this band are the hauntingly beautiful "Birthright" and the 60´s smelling "Halfway through the tour".
There´s no doubt that the new album is a grower because you will discover new favorites for each spin, the second track "Don´t do me any favours" sounds like a cousin to "Celice" without being a carbon copy.
Not their best album up to date but it has it´s place on the top 3 after their first two releases,"Analogue" definitely has more depth but also a few too many slow songs.