A-ha - Foot of the mountain 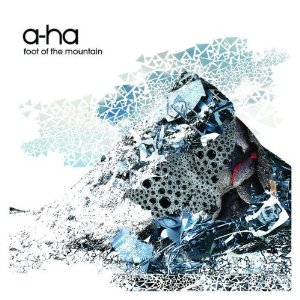 A-ha - Foot of the mountain (2009) Universal Records
Produced by Steve Osborne / Mark Saunders
ELECTRO POP
Tracks : 1.The bandstand 2.Riding the crest 3.What there is 4.Foot of the mountain 5.Real meaning 6.Shadowside 7.Nothing is keeping you here 8.Mother nature goes to heaven 9.Sunny mystery 10.Start the simulator
http://a-ha.com/
4 out of 5

Morten Harket must have one of the finest voices in Scandinavia, wherever he´s singing the flowers go into bloom and the birds dance in the air.
I was surprised to hear a more synth based sound on their new album "Foot of the mountain" in the same direction as their first albums from the mid 80´s.
The new album is atmospheric and beautiful, several songs can be considered as new A-ha classics while other are just great songs.
There aren´t that many bands around today with all the original members left that still can deliver first class albums but A-ha makes an awesome free kick goal with "Foot of the mountain".
The opener "The bandstand" is one of the best synthpop songs on this side of the century while the title track belongs on every future Best of compilation with this band. Other songs that will make me scream euphoria are "Shadowside", "Real meaning" and "Start the simulator". Magnificent......again.......oh la la!