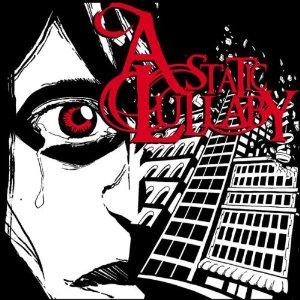 Screamo emo/hardcore band A Static Lullaby will release their new self titled album (which is their 3rd one) on Oct.10th and for those who remember their previous effort "Faso Latido", this California based unit were signed to Columbia but then dropped after that album. Their more polished and commercial sound on the major label album were a step away from the agressive hardcore on the 2003 debut "And don´t forget to breathe", their older fans will be pleased to hear that the new album is a return to that screamo sound. 3 members left the band after the last album so there´s a whole new line up on this one, vocalist Joe Brown and guitarist Dan Arnold are joined by the new members: John Death - guitar, Dane Poppin - Bass and Jarrod Alexander - drums.

The songs are a bit stronger on this album compared to "Faso Latido", A Static Lullaby sound a lot better with this more raw agressive emo metal and when they flirt with Dave Mustaine´s riff on "Reckoning day" (Megadeth) on "Contagious" - I just turn up the volume to max.
"Trigger happy tarantula" combines hardcore with melodic emo in the best way and while listening to these 11 new tracks, I must say that producer Steve Evetts (Story of the year, Senses Fail) knows what it takes to bring out the best from ASL.
There are a few moments where the non melodic hardcore gets the upperhand and stops me from rating this higher but overall, it´s a solid piece of work.
The closing track "Mechanical heart" is probably their best track so far, amazing vocal harmonies!