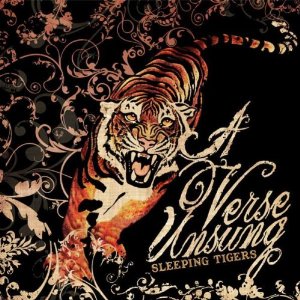 A Verse Unsung - Sleeping tigers (2007) Somio Artist Group
Produced by Steve Hodge
MODERN ROCK
Tracks : 1.Surround me 2.Coming home 3.Six strings 4.Pray for me 5.Too late 6.Resolve to fight 7.A better place 8.Last regret 9.This is you 10.The fall Part 2
http://www.newmedicinerock.com/
3 out of 5

I think of Minneapolis based A Verse Unsung´s music as strong black coffee, it will get you up and running in the morning in no time. Grammy award producer Steve Hodge (Sting, Janet Jackson) said AVU is the best band he´d worked with in a long time and Sebastian Davin of Dropping Daylight also loves this band with the following quote "when you turn it up loud you forget how young these guys are...I wish I rocked that hard at 17". The 5 songs on "The Autumn EP" left me wanting more, there are too many bands out there without any personal sound whatsoever with songs that are only "so-so" - it takes a helluva lot to convince me of something good but AVU have the potential to make it big because they´ve got it all........the right attitude, the right image, strong melodies, a tough sound and a good bandname.

None of the songs on the EP are featured on the band´s full length debut "Sleeping tigers", the album contains 10 three minute rockers making it a short album with only 32 minutes of running time.
I still think the EP is a bit better because some of the songs on "Sleeping tigers" soundalike but the album still rock with energetic rockers like "Coming home", "Too late" and "Six strings" with the cool phrase "Six strings will take me home".
AVU have created a great mix of emo, alternative metal and modern rock.