Absence of Concern - Open letters to a closed mind 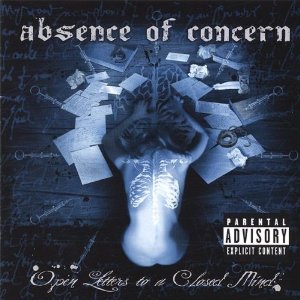 Absence of Concern - Open letters to a closed mind (2006) Kik It Records
Produced by Absence of Concern
MODERN ROCK
Tracks : 1.Beast in the beauty 2.American reject 3.Everytime I try 4.Assuming nothing 5.Goodbye 6.Beneath me 7.Ocean of angels 8.Suicide in progress 9.Falls apart 10.All you ever wanted
www.reverbnation.com/absenceofconcern
2 out of 5

Memphis based modern rock band Absence of Concern released their debut "Open letters to a closed mind" in 2006 and then followed up with the Skidd Mills produced self titled album in 2008. This 10 track debut album doesn´t sound as good as the 2nd one, there is too much low budget over this album, just listen to the drums that sounds like a poor demo. The music is ok, the rocker "Assume nothing" works rather well while other songs like "American reject" and "Goodbye" are typical mainstream modern rock songs that you´ve heard a thousand times before. The band has toured with Element 80, Hurt, Seether, Crossfade and 12 Stones but it has been rather quiet from this southern flavored rock band ever since 2008. Guitarist and founder Jon Dray Lee says "We wanted to do an album that exposes the close minded attitude of growing up in the Bible Belt" about the album title.