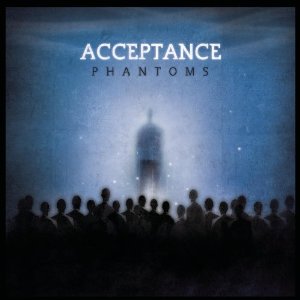 Acceptance - Phantoms (2005) Columbia Records
Produced by Aaron Sprinkle
POP PUNK / MODERN ROCK
Tracks : 1.Take cover 2.So contagious 3.In too far 4.The letter 5.Different 6.Ad astra per aspera 7.This conversation is over 8.Over you 9.Breathless 10.In the cold 11.Permanent 12.Glory us
www.facebook.com/acceptanceband
3,5 out of 5

The major label debut from pop punk rockers Acceptance is a huge facelift compared to their EP "Black lines to battlefields", this new album contains better songs and a better production which isn´t so hard to understand since they had a bigger budget to work with. Producer Aaron Sprinkle has done a remarkable good job as always with his works - so crispy and fresh! It´s also wrong to call their music for pop punk because you can also add some energetic modern rock in there as well,"Phantoms" is a very strong album that contains a bunch of hit single contenders - I don´t think that this Seattle based quintet should worry too much because with songs like "Take cover", "Over you", "The letter" and "Breathless" - Acceptance could very well be the next big thing. The group released an indie EP, Lost For Words, in 1999, and caught the ear of Columbia Records A&R executive (and iconic former host of MTV´s pioneering "120 Minutes") Matt Pinfield with a five-song demo (that would later form the core of Black Lines to Battlefields). Are you a fan of Lit and SR 71 ? - well then this album should be in your collection as well coz this is a band to watch!!