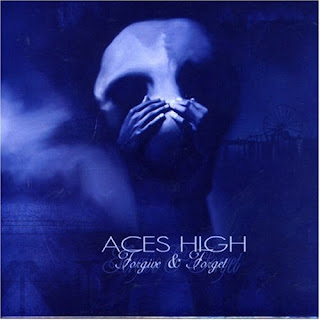 Do you remember the Swedish hard rock band Aces High that released the nice effort "Ten´n´out" in 94?!, well it surely had some strong moments with classy melodic hard rock mixed with AOR and then 4 years later they returned with the follow up "Pull no punches" that wasn´t as good as the debut. Now after another 6 years, this 5 piece hard rocking band is back with a 3rd album in the same style as the previous ones, Aces High play melodic hard rock in the same vein as MSG, Rainbow, Europe and Talisman to mention a few. They do it well and even if they pull off all the cliche´s-it´s performed with class and energy so it never gets boring.
The opening track "Killing time" smells Saxon a long way when they did their excellent "Back to the innocence" album, the title track "Forgive and forget" is one of the best songs on the album with a great AOR chorus. The semi ballad "Tell me" sounds a bit like Europe but singer Bjorn Andersen doesn´t have the same feel and clear pitch as Joey Tempest on it, then they walk in the footsteps of Richie Blackmore on "Judas Kiss" and "What I came for", very much Rainbow meets Purple kinda tracks.....they are ok for what they are but I would have liked to hear a more AOR-ish sounding stuff instead. The faster "Blinded" is only boring and should´ve been the last track instead of being in the middle of the album, the smooth and enjoyable instrumental piece "Legacy" sounds somewhere between the soundtrack themes of Cat People and Top Gun. They end the album with "Listen to fools",an epic song with great drumming and once again lots of Richie Blackmore vibes in the guitarwork.
I still think that the debut is their strongest album up to date but this new one satisfies too.