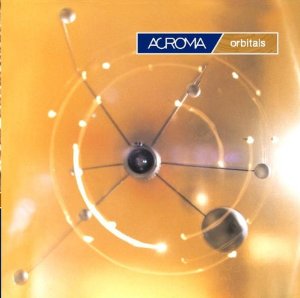 What do you get if you put together a bassplayer who loves industrial rock, a drummer which is a fan of Tom Waits and weird stuff, a sixstringbender who likes to listen to Smashing Pumpkins and Janes Addiction plus a vocalist that is a sucker for tuneful timeless pop?!.....the answer is ACROMA (pronounced uh-crow-muh) from Salt lake city, Utah!
Jeremy Stanley-Vocals, Brian Christensen-Guitar, Tom Collins-Bass and Joshua Zirbel-Drums formed Acroma in the late 90´s and had their fresh and guitardriven debut out early May.

Acroma spelled with an H (Achroma) is the medical term for a lack of colour but looking at the music, it sure does not lack of good songs on this bands first album titled "Orbitals", it contains very strong modern rock with personality and edge. The closest sounding bands I come to think about are Live, Stir and Cave in but Acroma do have their own personal sound too with a fantastic produced bass. The album gets better and better everytime I listen to it and who knows by the end of the year, how much I will like "Orbitals"?!, you just have to check em out because it opens with the moving "Careless ones" which is a short track but goes over with a beautiful bridge into the tougher "Sunrises down"(a real rocker).
3rd out is my fave "Sweat" that is a guitardriven uptempo affair filled with lots of energy, then after that brilliant start of the album the rest is a nice mix of melodic modern rock songs such as "Wash away"(a song with Stir vibes) and "On that day"(U2 meets Live) plus more massive riff going rockers like "Motive"(nice groove) and "Orbitals" (the title track is made for the party mix tape). This album was a good vitamin cure between all the numetal releases and ordinary modern rock bands that keep coming all the time.