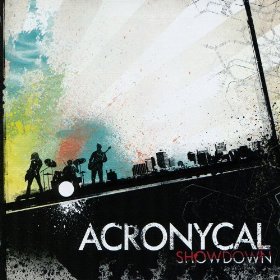 Acronycal - Showdown (2010) Independent
Produced by Acronycal
ROCK
Tracks : 1.Tonight´s the night 2.Naughty boys and naughty girls 3.Bullet in the wind 4.Quarter to 6 5.Lost without a name 6.On my own 7.Dead or alive 8.Unbreakable 9.Bomb child 10.Here´s to you 11.Calm before the storm 12.Because of you
www.facebook.com/AcronycalBand
2,5 out of 5

No, this is not a prescription I´ve got at the pharmacy last week, Acronycal is a rock band from Edmonton, Canada that has relocated to Palm Springs, California. There are some nice moments on their debut album "Showdown" which opens strong with "Tonight´s the night" and "Naughty boys and naughty girls". Both has hit choruses that I love to hear over and over again and the catchy "Lost without a name" is quite good too but the album is a bit uneven with a few mediocre tracks as well. Their sound lies somewhere between pop/punk and alternative rock, for fans of Social Code, Acceptance and Projet Orange.