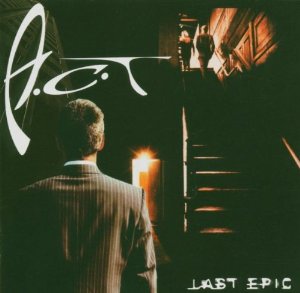 A.C.T - Last epic (2003) Atenzia Records
Produced by Pelle Saether
PROGRESSIVE ROCK
Tracks : 1.Intro 2.Wailings from a building 3.Mr.Landlord 4.Torn by a phrase 5.Ted´s ballad 6.Dance of Mr.Gumble 7.Wake up 8.Manipulator 9.A loaded situation 10.The observer 11.The cause 12.The effect 13.Summary 14.Outro
https://myspace.com/actworld
4 out of 5

Step into Restaurant A.C.T where doorman Herman welcomes you to a menu of pompgourmet, moogsalad, progressive smorgasbord, filet Saganese, City Boy Suffle and ELO dessert....an a la carte you can´t resist! Compliments to the chef Jerry Sahlin that is responsible for this luxury that is being served. Very well worth the big money you have to spend on this mighty product.
3rd time out for these wonderful personalities who are having the time of their lives supporting Saga on the European tour, their two previous albums "Today´s report" and "Imaginary friends" has put a mark on the map of rock where A.C.T have come to stay...with this new concept album "Last epic" that is about life in an apartment house, takes them further up on the ladder of progressive rock. These five guys have their own theatrical sound that will influence many other bands, be so sure about that!
New drummer Tomas Lejon has become a true member of the band and puts a little more weight into their trademark of pomp. Hats off! Oh!..I almost forgot when you see Mr.Landlord...put on your big smile and start sucking on.