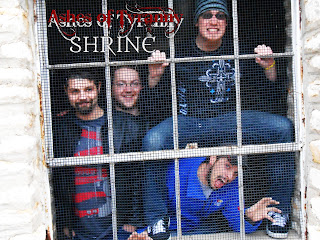 Ashes of Tyranny - Shrine (2013) Independent
Produced by Ashes of Tyranny
HEAVY METAL
Tracks : 1.Demolition man 2.Shrine 3.The rag man 4.Start the flood 5.Satisfy 6.For you 7.Suffer 8.Deathbringer
www.facebook.com/AshesofTyranny
2 out of 5

Do you remember the 80´s metal compilations Metal For Muthas and U.S Metal? They introduced you to a lot of upcoming heavy metal bands in the U.K and U.S.A, the Kansas based Ashes of Tyranny sounds just like they could´ve had a song featured on such a compilation. This 4 piece has also added a modern input to that 80´s heavy metal sound with traces of grunge and numetal but just a slice, unfortunately the quality of the production goes from poor demo sound on "The rag man" to good studio quality on the rest of the tracks. It´s the same thing with the songs that are uneven with a few reaching normal standards like "Demolition man", "Satisfy" and "For you" while others such as "The rag man" and "Start the flood" are below par. However, the band sound tight and they deliver great riffs in "Deathbringer".
Upplagd av RothNRoll kl. 5:43 AM