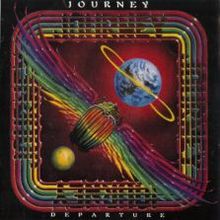 If the first 3 albums was chapter 1 in the history of Journey, then the 1980 album Departure was the end of chapter 2. This would become Gregg Rolie´s last studio album of classic Journey songs with the band, they released a soundtrack album of mostly instrumental songs called Dream after dream later the same year plus the live album Captured. So 1980 was a fantastic year for Journey fans, Rolie had been touring non stop for more than a decade and wanted to settle down with his family and quit the band after the tour. Journey wanted to do a more rocking album with Departure and thought Lynyrd Skynyrd´s live sound engineer Kevin Elson would be perfect for the job. Kevin actually survived the plane crash where several members of Lynyrd Skynyrd died in.

This is also the first album to feature Neal Schon as lead vocalist since the 1977 album Next, Neal is singing the lead on the mighty beautiful People and places. The album had 2 hit singles with Anyway you want it and Stay a while, it was also their best selling album so far where it reached #8 on the album charts. The band was inspired by ACDC as their opening act when they wrote Where were you, it became a fan fave that opened many Journey shows.
I also think Steve Smith does some of his best drumwork on this album on songs like Line of fire, Where were you, Precious time and Homemade love. It´s not so strange that Steve Smith was named one of the Top 25 drummers in 2001 by Modern Drummer Magazine when you listen to Departure. The song Natural thing was added as a bonus track on the 2006 remastered version but the song is actually a leftover from the Evolution sessions. My favourite track on this album has always been and will always be Someday soon that is sung by Gregg Rolie, what a fantastic song. The end of an era and the beginning of a new one.