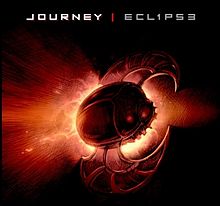 Journey - Eclipse (2011) Frontiers Records
Produced by Kevin Shirley
AOR
Tracks : 1.City of hope 2.Edge of the moment 3.Chain of love 4.Tantra 5.Anything is possible 6.Resonate 7.She´s a mystery 8.Human feel 9.Ritual 10.To whom it may concern 11.Someone 12.Venus
www.journeymusic.com
4,5 out of 5

Being a huge Journey fan since childhood has been a way of life for me, their songs have been inspiring through good and bad times in a way that no other band or artist could match. When Perry was out of the band in 1998, a part of me died but a new love for the band grew with replacement Steve Augeri. A great singer I started to love already in his first band Tall Stories in the early 90´s, three non-Perry albums followed with "Arrival", "Red 13"and "Generations" but in 2005 Augeri´s voice was shut after 7 years of touring singing the tough notes of Steve Perry.

So when they recruited Arnel Pineda for the 2008 album "Revelation", I wasn´t at all convinced that A Perry clone would be the best choice for this band. And the re-recordings of classic Journey hits on the 2nd disc was complete murder in my opinion. My door on Journey was closed just like the case with Perry and the band in 1998. But another part of me said I should listen to their brand new album "Eclipse" because things can change and still, they are the no.1 band for me even though Perry isn´t around anylonger.
Eclipse debuted at #16 in the states but they need a hit single on radio to make it climb higher on the album charts, I´m not sure "City of hope" is the right choice for this. Eclipse is more of an album record filled with stunning Cain/Schon songs in the same fine style as Trial by fire and Arrival plus with traces of the early fusion era. Schon plays guitar like a god on this album and Arnel sings with his own voice this time which is the most positive thing. Eclipse kicks the shit out of Revelation and the song "Tantra" is the best I´ve heard from Journey since the 1996 album "Trial by fire".