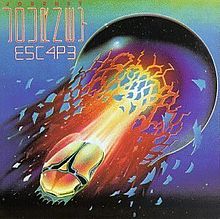 There is a Journey before and after the 1981 Escape album, the band took it to new heights with this masterpiece. And it is truly a masterpiece in it´s own right, if I could give it 6 stars on a 5 star rating I would. This is the best album ever made, Journey reached their peak with Escape and remained on the throne during the 80´s. This album also presented a new chapter in the history of Journey with Jonathan Cain replacing Gregg Rolie who decided to retire for a while.

Jonathan Cain was born in Chicago and started playing piano when he was 12, his first band was The Futuras. He released his first solo album in 1976 and his friend Robby Patten introduced Jonathan to The Babys and soon he auditioned for the band. The Babys ended up as an opening act for Journey in 1980 and they were looking for a keyboard player at that time, talk about perfect timing. Cain is not only a superb musician, he is also a fantastic lyricist and one of the main reasons the band got even more successful after Escape. The album scored 4 top 20 hits with Still they ride, Don’t stop believin, Open arms and Who´s crying now. Cain wrote the melody for Open arms when he was with The Babys but lead singer John Waite didn´t like it, Steve Perry however loved it but they got resistance from Neal Schon who thought it was too syrupy as well. –I won´t play guitar on it, Neal said and left the studio. But he came back and the rest is history.
It´s not the first time Journey gets a big hit with a song that Neal dislikes, the ones that Neal likes the least usually end up as singles and becomes big sellers. This must be the hardest album to follow up but if a band should do it, it would be Journey and they managed to release an equally good album with Frontiers in 1983 but that´s another story.