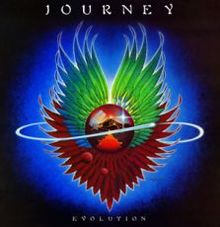 Why change a winning formula? After the huge success of Journey´s 1978 album "Infinity", the band continued working with producer Roy Thomas Baker on the following "Evolution". But singer Steve Perry wanted to change the groove in the band´s songs and kept telling Aunsley Dunbar how to play which he couldn´t take and quit the band during the writing of the album. Perry had a different musicalbackground than the others, he was more into R&B when Schon and the others were more of blues and rock players. The right man for the job to play these new grooves was Steve Smith that had played with Jean Luc Ponty, Focus and Ronnie Montrose before joining Journey.
Evolution got as successful as the previous album with 3 million copies sold and their first Top 20 hit "Lovin, touchin, squeezin", even though this album marks an important cornerstone of Journey´s career - it is also the most overlooked album when the band plays live and when there are collections released. Only one more song along with "Lovin, touchin, squeezin" has ever been included on Hits and Best of albums and it´s "Just the same way", the last time we got to hear plenty of songs performed live from this brilliant album was the 1980 live album "Captured". I think it´s a shame since some of their best material can be found here like "Too late", "Sweet and simple", "When you´re alone it aint easy", "Lovin you is easy", "Just the same way" and "City of the angels".

The opener "Majestic" was used on tape to open concerts, a real classic. "Sweet and simple" was written by Steve Perry five years before joining Journey, "Lovin you is easy" was co-written with Greg Errico (drummer of Sly and the family stone and Weather Report). When most people prefer to nanana along to "Lovin, touchin, squeezin", I choose "Just the same way" instead which is sung by Gregg Rolie - truly one of my all time faves with the band!