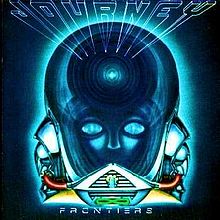 I still remember the day when I got home with a copy of Frontiers, I remember how my room looked like and the expression on my face when I heard the intro of Seperate ways. By this time, Journey had become my ultimate no.1 fave band with Escapespinning both day and night. And also in 1982 they made their way onto the Tron soundtrack with "Only solutions" which was perfect as fuel for my Journey hungry heart, while waiting for the follow up album Frontiers to come out. Little did I know that they replaced Only the young and Ask the lonely with Troubled child and Back talk, I was very satisfied with all 10 tracks. I mean, the whole first side with Seperate ways, Send her my love, Chain reaction, After the fall and Faithfully sounded like a Greatest hits record.
And the second side with Edge of the blade, Rubicon and the title track Frontiers were all so marvelous and progressive. Amazing vocals from Steve Perry and smart arranged songs from the band. I was stunned and so were all their fans because the album was their 2nd best selling record after Escape, it reached #2 on the Billboard album charts. Ask the lonely was released the same year on the Two of a kind Soundtrack, it was recorded for Frontiers but pulled off and so was the case with Only the young that was saved for the Vision quest Soundtrack in 1985 and also reached the Top 10! With those two songs included on Frontiers, it would be even a stronger album than Escape.

However, things would come to an end with this super line up. Steve Smith and Ross Valory left the band after the tour. Neal Schon was busy making albums with Jan Hammer and Steve Perry started working on his first solo album "Street talk" that would be released in 1984.