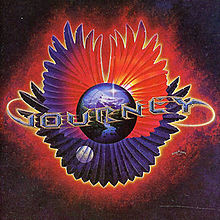 Journey - Infinity (1978) Columbia Records
Produced by Roy Thomas Baker
AOR
Tracks : 1.Lights 2.Feeling that way 3.Anytime 4.La Do Da 5.Patiently 6.Wheel in the sky 7.Something to hide 8.Winds of March 9.Can do 10.Opened the door
www.journeymusic.com
5 out of 5

The record label was gonna drop Journey after the poor sales of the first 3 albums so "Infinity" was going to be a do or die album, manager Herbie Herbert wasn´t gonna lie on the sofa to see the band die so he brought in Robert Fleischman to sing with Journey on tour when they opened for ELP. The band liked his voice and they wrote 4 songs together, Wheel in the sky, Anytime, Winds of March and For you (this song was later released on the Time Collection and also re-recorded for Fleischman´s solo album Perfect stranger in 1979). But Herbie thought Fleischman was too cocky and invited a 2nd singer, Steve Perry from the Alien Project too audition for Journey.

Perry started out as a drummer in his first band The Sullies for 8-10 years before taking over the frontman role completely with Alien Project in 1977, Herbie was the manager for Perry´s band as well and they were about to sign to CBS when their bassist died in a car accident. This could´ve been the end of Perry´s musical career, not only that he was devastated over his best friend´s death but none of the members in Journey were too thrilled over Perry in the band either. Herbie showed who was the boss and convinced them to work with the Sam Cooke-soundalike.
Schon and Perry wrote Lights and Patiently straight away and chemistry seemed to click between them, the band knew a big producer was the only right thing for this album so they hired Roy Thomas Baker who had done Queen before Journey. He immediately got the band to track multiple vocal tracks which became Journey´s trademark for the following albums in the Rolie era. Infinity got as big as they hoped for, it sold 3 million copies and reached #21 on the Billboard album charts. They scored 3 hit singles with Wheel in the sky, Lights and Feeling that way. During the recording sessions, producer Roy Thomas Baker got a little too excited and sprayed a fire extinguisher all over the studio. The owner took Roy into a back room and beat the shit out of him. I think Roy could take that, he had created history with Infinity!