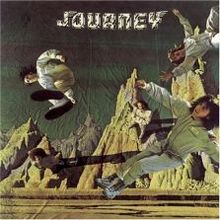 Journey - Journey (1975) Columbia Records
Produced by Roy Halee
PROGRESSIVE ROCK
Tracks : 1.Of a lifetime 2.In the morning day 3.Kohoutek 4.To play some music 5.Topaz 6.In my lonely feeling/conversations 7.Mystery mountain
www.journeymusic.com
3 out of 5

Neal Schon knew early that he wanted to stand on stage and perform in front of people, at the age of 14 he started his first band Crime Stompers in the Bay Area. This was 1968, 2 years later another soon to be famous guitarist Carlos Santana released the breakthrough album "Abraxas" that also featured keyboardist/singer Gregg Rolie. For the next album "Santana III" (1971), Neal Schon joined the band and quickly Rolie and Schon became two respected names in the music business. Neal was offered to play with Eric Clapton when he was 16 but he stayed with Santana instead.
After some problems with Carlos Santana, Rolie and Schon quit the band and formed a studio band called Golden Gate Rhythm Section together with Prairie Prince from The Tubes, Ross Valory from Steve Miller Band and George Tickner. Manager Herbie Herbert saw potential in the band and started planning a record but they needed a better name, a roadie of the band suggested Journey and they all loved it. Prairie couldn´t stay with them for the album because of his commitment to The Tubes so along came Aunsley Dunbar who had been playing with Frank Zappa and the line up was complete.

Journey´s first sound ofcourse had traces of Santana but the songs on their self titled album from 1975 was more of a fusion rock style with Rolie´s characteristic voice. Songs like "Of a lifetime", "kohoutek" and "Mystery mountain" (this song was performed on Journey´s 30th anniversary tour in 2005), became fan favorites live. They played in front of crowds of thousands and thousands but Herbie Herbert wasn´t as happy about the record sales. Tickner left Journey after this album to attend medical school, he remained friends with the band and in 2005, he released the album VTR - Cinema with Ross Valory and keyboardist Roseman. My favorite song of Journey´s first album is "To play some music".