Journey - Look into the future 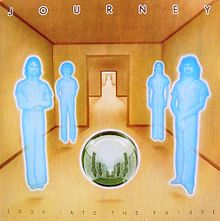 Journey - Look into the future (1976) Columbia Records
Produced by Glen Kolotkin
PROGRESSIVE ROCK
Tracks : 1.On a saturday nite 2.It´s all too much 3.Anyway 4.She makes me feel alright 5.You´re on your own 6.Look into the future 7.Midnight dreamer 8.I´m gonna leave you
www.journeymusic.com
3 out of 5

Journey was still searching for which direction they would take soundwise, the Santana influences were obvious on their debut album which only sold 80,000 copies. The record company wanted the band to make a more commercial album with "Look into the future", the band more or less left the jazz rock oriented sound from the first album and made a heavier record with LITF. You could say they sounded a bit like Uriah Heep but more psychedelic, there is also a slight piece of funk in the record which isn´t so strange since Larry Graham invited Neal to play on funk queen Betty Davis both albums between 73-75. You can clearly hear a band with no identity on this album, the melodic stuff is here with "On a saturday nite" and The Beatles cover "It´s all too much".

George Tickner had left the band but he co-wrote 2 songs on the album with "I´m gonna leave you" and "You´re on your own", also the only tracks that reminded of the first album. When Journey opened for Kansas in spring 1976, they played "I´m gonna leave you" where the riff later showed up on the track "Carry on wayward son" on the Kansas album "Leftoverture" in October 76. Journey rocked harder on the track "She makes me feel alright", a song that was performed with Steve Perry in 1978 and recorded for TV at the Chicago Soundstage. "Midnight dreamer" was the most Santana sounding track and it would take another 20 years for Rolie and Schon to release a Santana-like album with Abraxas Pool in 1994. A band made up of former Santana members but it didn´t sell at all.
And sales was something that bothered the band, the first album did ok but "Look into the future" sold even less. I think the album is good but it´s a bit uneven, however tracks like "On a saturday nite" and "She makes me feel alright" were the best the band had written so far.