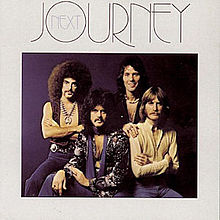 Journey - Next (1977) Columbia Records
Produced by Journey
PROGRESSIVE ROCK
Tracks : 1.Spaceman 2.People 3.I would find you 4.Here we are 5.Hustler 6.Next 7.Nickel and dime 8.Karma
www.journeymusic.com
3 out of 5

Journey´s 3rd album "Next" was actually the first album I heard with this band, back in 1977 I was listening a lot to bands like Kiss, Sweet, Slade, Nazareth, BTO and Kansas. I can´t say Journey was one of my favorite bands back then, I thought "Next" was a good record but I wasn´t a real fan (yet). I kinda liked Rolie´s voice and Schon´s guitar playing was utterly brilliant, but their songwriting wasn´t up to par with my favorite bands listed above. This was also something that concerned manager Herbie Herbert, Journey was selling out concerts all over the states but they was selling zero records in 1977.
Metallica guitarist Kirk Hammett has listed "Next" as one of his favorite albums and especially riff strong tracks like "Karma" and "Hustler", the band had a small budget when they self produced this album which is quite obvious when you listen to it 3 decades later. The production must be the weakest from Journey and self producing is something they should keep away from doing because the 2002 EP "Red 13" also suck production-wise. There is some great playing on "Next" and I do like the heavy rock direction they took, but to take it another step for the next plateau - they needed a lead singer and a big budget producer!