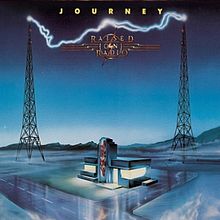 Journey - Raised on radio (1986) Columbia Records
Produced by Steve Perry / Jim Gaines
AOR
Tracks : 1.Girl can´t help it 2.Positive touch 3.Suzanne 4.Be good to yourself 5.Once you love somebody 6.Happy to give 7.Raised on radio 8.I´ll be alright without you 9.It could have been you 10.The eyes of a woman 11.Why can´t this night go on forever
www.journeymusic.com
5 out of 5

Some albums are meant to be the perfect summer soundtrack or simply given on any day for a long ride in the car, Journey´s Raised on radio is such an album. This is also the first album without long time member Ross Valory who was replaced by Randy Jackson, drummer Steve "machine gun" Smith plays on 3 tracks while the rest of the album features Larrie Londin who also played on Steve Perry´s Street talk, released in 1984. This album was meant to be called Freedom but Steve Perry changed it to Raised on radio, some fans refer this album as a Perry solo album since he produced it as well but to me it sounds just like a true Journey album.

All the right elements can be found here, the masterful ballads "Happy to give" and "Why can´t this night go on forever". The majestic AOR anthems "Suzanne", "Girl can´t help it" and "I´ll be alright without you" plus the band fave "Be good to yourself" that´s always included in their setlists live. Even though I was in heaven when Raised on radio arrived in stores, this was also the end of a magic era because the band split up after the tour. Perry started working on his second solo album "Against the wall", Schon and Cain went on to form the new band Bad English and the remaining former members Ross Valory, Steve Smith and Gregg Rolie returned as The Storm. It would take another 10 years for another Journey album.