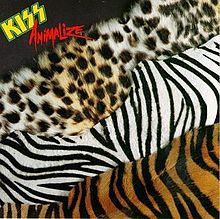 Kiss - Animalize (1984) Mercury Records
Produced by Paul Stanley
HARD ROCK
Tracks : 1.I´ve had enough 2.Heaven´s on fire 3.Burn bitch burn 4.Get all you can take 5.Lovely is the hunter 6.Under the gun 7.Thrills in the night 8.While the city sleeps 9.Murder in high-heels
www.kissonline.com
3 out of 5

In, 1984 I was 19 years old and got my first day time job making my own money as well. So I could buy lots and lots of more records, it was a joy to visit the retail stores and check what was new every week. I´m sorry to say the magic was gone with my favorite band Kiss when they took off their make up and both Peter and Ace had left the band, I bought Animalize when it came out but besides a few good tunes like "Thrills in the night", "Heavens on fire" and "I´ve had enough" - this was yet another day at work for Kiss who had issues with keeping their lead guitar player remain in the band.
Vinnie Vincent left after the Lick it up tour and they found Hollywood son Mark St John who was more of a jazz guitarist but Mark took the job and after only 6 weeks, they started working on Animalize. Gene had his mind on the movie Runaway he was gonna shoot with Tom Selleck so Gene layed down his bass and vocal tracks really fast and then went to do some acting. Paul didn´t keep much of the bass and instead Mitch Weissman who co-wrote 3 tracks had to redo some of the bass, Jean Beauvoir played the bass on "Thrills in the night" and Bruce Kulick that would become the lead guitarist after Mark St John, played solos on "Murder in high heels" and "Lonely is the hunter". Gene´s songs sucks big time but Paul´s songs work really well. A good album, but quite small compared to the gigantic 70´s albums.