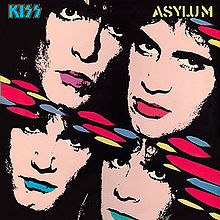 Kiss - Asylum (1985) Mercury Records
Produced by Paul Stanley / Gene Simmons
HARD ROCK
Tracks : 1.King of the mountain 2.Any way you slice it 3.Who wants to be lonely 4.Trial by fire 5.I´m alive 6.Love´s a deadly weapon 7.Tears are falling 8.Secretly cruel 9.Radar for love 10.Uh all night
www.kissonline.com
3 out of 5

Guitarist Mark St John was a short lived member of Kiss and left because of medical reasons right after the Animalize album, they recruited Bruce Kulick who´s brother Bob thought of recommending already back in 1981 when Ace was leaving the band. Bruce would in fact become a long time member of Kiss between 1985-1996 when Ace returned. There are a couple of dreadful things about Asylum, first the artwork which looks cheesy and cheap and then the title of the closing track "Uh all night" that is pretty pathetic. Paul and Gene handled the production which is ok but I think there are too many fillers on this album, it opens really strong with "King of the mountain" and the melodic "Tears are falling" is a Stanley penned pearl. My favorite is "Who wants to be lonely" and I wish there could´ve been more tracks in the same vein as these 3 tracks.
The best track by Gene is "Trial by fire", originally called Live fast Die young and another cool fact you might not know is that the fast "Love´s a deadly weapon" was recorded for The Elder but was pushed aside by Bob Ezrin. It didn´t suit the concept, the problem with these 3 albums Lick it up, Animalize and Asylum is that they all soundalike but are also lacking of classic Kiss rocknroll.