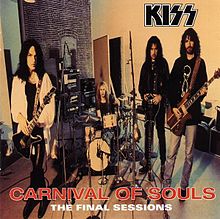 In 1995, Stanley and Simmons looked at the charts and noticed Grunge was a big thing so they decided on making a dark and real heavy album far from the 80´s party rock they had left already on the previous Revenge album. They worked with Toby Wright (Alice in Chains, KoRn, Sevendust) and planned on releasing it 1996 but it was cancelled when Kiss announced their reunion tour. "Carnival of souls" was released in 1997 and it´s the only album together with The Elder that didn´t reach Gold status. If you ask me, this doesn´t sound like a Kiss album at all. I never understood this sound and I think I only listened to it twice, quite ok as a numetal album but rather crappy as a Kiss album.