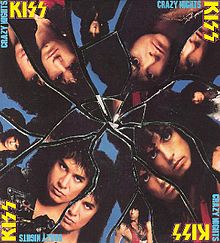 Kiss - Crazy nights (1987) Mercury Records
Produced by Ron Nevison
HARD ROCK
Tracks : 1.Crazy crazy nights 2.I´ll fight hell to hold you 3.Bang you 4.No, no, no 5.Hell or highwater 6.My way 7.When your walls come down 8.Reason to live 9.Good girl gone bad 10.Turn on the night 11.Thief in the night
www.kissonline.com
4,5 out of 5

When Paul Stanley saw which bands that ruled the charts in the mid 80´s, he wanted to ride on the wave and contacted Ron Nevison who produced all those hit records with Heart, Ozzy and Survivor. This was the age of guitar acrobatics and AOR, Bruce Kulick was the right man for the job as their lead guitar since he´s playing on the 2nd album in a row with "Crazy nights". The ones before him only stayed for one album, this is Gene Simmons least favorite record with Kiss and I can see why - Gene is the god of thunder and he gets sick with all those love lyrics. But as a Paul record, Crazy nights is huge!
It´s like a parade of grand melodic rock where the amazing songs stand in line such as "Turn on the night", "My way", "I´ll fight hell to hold you", "Crazy nights", "Reason to live" and "Bang bang you". The great "Sword and stone" was left out and later used for the Shocker Soundtrack, Loverboy guitarist Paul Dean also recorded a version on his solo album of it. However, the success was a fact and the album "Crazy nights" brought back Kiss on the charts once again. This might also be the album where Paul is singing his highest notes, it´s so high the dogs only hear it!