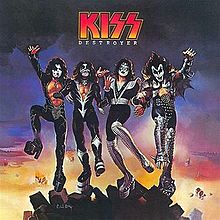 After Kiss Alive, the band felt they needed to do something different and got in touch with producer Bob Ezrin who had worked with Alice Cooper earlier. "Destroyer" was a difficult album to make for Kiss because Ezrin wanted to change a lot of things about the band´s sound, he wanted to be in charge and Stanley and Simmons didn´t feel too comfortable about that idea since Ezrin arranged their songs in a completely different way with orchestra and grand piano.
He told the band, -do you want to make a great record or a 3 chord record? The answer was simple, -We want to make a great record, Stanley and the guys told Ezrin. They worked with several outside songwriters such as Mark Anthony who wrote King of the night time world and Stanley re-arranged it for the record, Kim Fowley and Stan Penridge were also involved with the record but the main songwriter was Bob Ezrin and the band ofcourse. "Destroyer" is the greatest record from Kiss no doubt, it might not be a typical Kiss record but it´s got the best songs and the production still sound awesome to this day.

Some cool info about the album : Alice Cooper guitarist Dick Wagner is not credited but he´s playing lead guitar on "Flaming youth", "Beth" and "Sweet pain" mostly because Ace had partied hard at Studio 54 and had a real hangover those sessions. Stanley and Simmons didn´t want "Beth" to be on the record because it didn´t sound like a Kiss song but their manager Bill Aucoin had the final say in this matter and the rest is history. What can I say, this is without doubt one of the best rock albums ever made!