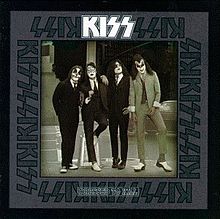 Kiss - Dressed to kill (1975) Casablanca Records
Produced by Neil Bogart
HARD ROCK
Tracks : 1.Room service 2.Two timer 3.Ladies in waiting 4.Getaway 5.Rock bottom 6.C´mon and love me 7.Anything for my baby 8.She 9.Love her all I can 10.Rock and roll all nite
www.kissonline.com
4 out of 5

Kiss were releasing albums every six months in the 70´s so while out on tour with the Hotter than hell album from 1974, their manager Bill Aucoin said they needed to record a new album. Most of these songs on "Dressed to kill" were written in the studio just before the sessions, the rhythm tracks were all recorded live and it´s basically a rocknroll album where they dropped their first real anthem with "Rock and roll all nite". That song was originally called Drive me wild but Gene changed the title which was a good move, Kiss also included 2 songs from the Wicked Lester days with "She" and "Love her all I can" mostly because they were short of songs. And this is not a lengthy album I might add, only 30 minutes long but a true party record with great songs like "Rock bottom", "C´mon and love me", "Room service" and of course the classic "She". Kiss truly layed down the foundation of their career with these 3 first albums, and what a monument it became!