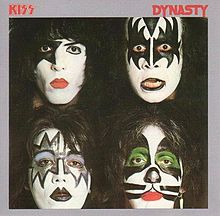 By the time Dynasty came out, Kiss had released 7 studio albums in 5 years which is more than impossible for most bands today. I mean, some bands even take 5 years to write a record and they don´t even become near as classic as these early Kiss albums. After Love gun, the band didn´t want to make the same album over and over again since that one and the previous Rock and roll over felt like twins. When the band think back on this album today, they are not as happy about it as they were in 1979. It is too safe and has no edge, says Stanley. Dynasty was however very successful as a Top 10 album with "I was made for loving you" as a mega hit, the album features only 7 new tracks with the other two being a cover, The Rolling Stones song "2,000 man" and "Dirty livin" which was the 3rd track re-recorded from the Lips days. The other 2 Lips tracks from Penridge and Criss on earlier Kiss albums were "Hooligan" and "Baby driver".
Criss was doíng his solo album "Out of control" at the same time and was unable to track drums for this album so Anton Fig was hired to do the job, Fig also played drums on Ace Frehley´s 1978 solo album and when you think about it. Ace is singing lead on 4 tracks on "Dynasty" making it half a Ace solo album with Fig drumming. No wonder why I love this album so much, also included on this album is the AOR smash "Sure know something" by Stanley which is one of my all time favorite songs by the band. Killer album!