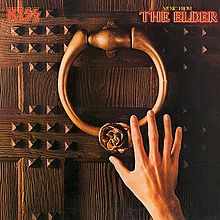 1980-1981 must have been really confusing years for Kiss with the pop oriented Unmasked album and then the concept album The Elder that failed really hard on the charts, the band brought in Bob Ezrin from Destroyer to produce this epic album that was planned to be a movie as well. Peter Criss was out of the band and Eric Carr replaced him, but even stranger is that Carr isn’t playing on all tracks on The Elder. Allan Swartzberg who played on Gene Simmons solo album, plays on 2 tracks but he was not credited for it. Eric was devastated when Bob chose to use Allan´s work instead and Eric´s contribution "Carr Jam" was left out and later released on the Revenge album.
The Elder is not a bad album but it´s not a Kiss album, oh it says Kiss on the sleeve but it sounds more like a prog rock record and a good one too. Tracks like "Under the rose", "Only you" and "Odyssey" are really great progrock songs but really not under Kiss standards. The heavier "The oath" is as close as we get to a typical Kiss song. No wonder the band don´t play any songs from this album live, the fans would probably not understand yada if songs like "Dark light" or "Mr Blackwell" wouldend upin the setlist. I like to listen to The Elder once in a while but I wouldn´t include any songs on a best of compilation.