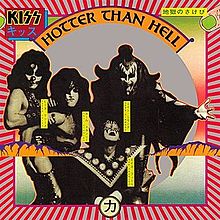 Kiss and producer Richie Wise were never happy with the production of Hotter than hell, the band was out on tour feeling homesick, Stanley´s favorite guitar was stolen, Richie Wise couldn´t get the mix right even how much he worked on it but there were some kick ass songs recorded for sure. When I think about it, Kiss was out on tour when their manager wanted them to record a new album the very same year the first album came out. The band didn´t have enough songs for an entire album so they wrote a few in their hotel rooms and picked the leftovers from the first album, all was done very quickly and with that mind you should think that the result would be an album filled with fillers. But oh my, not only can we find classics like "Parasite", "Hotter than hell", "Watching you" and"Got to choose" but here are also some of their best unknown songs like "Coming home", "Strange ways", "Goin blind" and "All the way". With a better production, this would´ve been 5 stars!