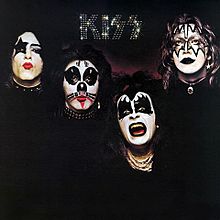 Although, the self titled album from icons Kiss wasn´t their first album really, that was the Wicked Lester album from 1973 but that one was cancelled by Epic Records and all that was released were 3 tracks on the the Kiss Box set. But the 1974 album Kiss was their first officially released album and it´s also the band´s favorite album, not so strange since it´s the mother of all Kiss albums with 7 tracks ended up on the classic Kiss Alive. The band recorded this album in 3 weeks and even if the production sound a bit dated in 2011, I must say that with songs like "Deuce", "Strutter", "Nothing to lose, "Firehouse", "Black diamond", "Cold gin", "100.000 years" and my personal fave "Kissin time" that the band rarely play live, this album has become the rocknroll bible for most rock bands out there. "Strutter" was later re-recorded on the 1978 Double Platinum album and with 80 million sold albums, you can say Kiss started off with a bang with this 35 minute long album.