Kiss - Lick it up 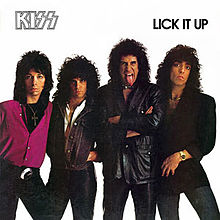 Kiss - Lick it up (1983) Mercury Records
Produced by Michael James Jackson / Kiss
HARD ROCK
Tracks : 1.Exciter 2.Not for the innocent 3.Lick it up 4.Young and wasted 5.Gimme more 6.All hell´s breaking loose 7.A million to one 8.Fits like a glove 9.Dance all over your face 10.And on the 8th day
www.kissonline.com
3 out of 5

After the disappointing sales of Unmasked, The Elder and Creatures of the night. Things really started to happen with Lick it up in 1983, it was a whole new chapter for Kiss with a new label, a new line up of Stanley, Simmons, Carr and Vincent. Vinnie played on the Creatures album but wasn´t an official member until the Lick it up album but most important - the band finally took off their masks. The success was a fact with their first platinum selling album since Dynasty, I saw the band for the first time live on this tour and it was a good show but it wasn´t great. Just like this album, it´s a good album but no way as great as Creatures or Dynasty.
The band continued to work with Michael James Jackson and the production is really good, but I don´t think the songs hold all the way. There are a few great songs like "Not for the innocent", "A million to one" (I love this one), "All hell´s breaking loose" and the title track "Lick it up". The rest however felt like clouds on a sunny sky, sure it wasn´t raining but I wasn´t too thrilled either about this album.