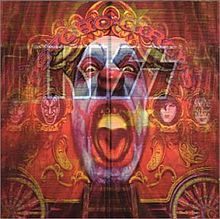 Kiss - Psycho circus (1998) Mercury Records
Produced by Bruce Fairbairn
HARD ROCK
Tracks : 1.Psycho circus 2.Within 3.I pledge allegiance to the state of rocknroll 4.Into the void 5.We are one 6.You wanted the best 7.Raise your glasses 8.I finally found my way 9.Dreamin 10.Journey of 1,000 years
www.kissonline.com
3,5 out of 5

I was thrilled about the first Kiss album with the original line up in 2 decades, "Psycho circus" is a great record, not a classic Kiss record but it´s really good. I was pleased when it came out, I mean just to hear the title track which bring thoughts to Destroyer and Ace´s contribution "Into the void" that has the typical Kiss trademark. Also Gene wrote some great songs with "Within" and "We are one", we got to hear Peter sing with the band again on Paul and Bob Ezrin´s ballad "I finally found a way". Peter didn´t get any of his songs on the record because producer Bruce Fairbairn thought they were too crappy but Paul wrote some good shit with "I pledge allegiance to the state of rocknroll" and "Raise your glasses".
There were 19 songs recorded with leftovers like "Nothing can keep me away from you" (later released on The Box Set), "Body and soul", "Rear view", "Sweet and dirty", "I am yours", "I wanna rule the world" and "Carnival of souls". Peter only played drums on "Into the void", Kevin Valentine plays on all the rest and Ace only played lead on a couple songs. Tommy Thayer of BlacknBlue played lead on most of the tracks, well so much for a comeback album!