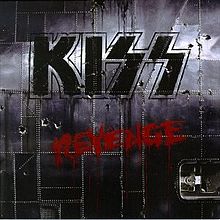 Kiss - Revenge (1992) Mercury Records
Produced by Bob Ezrin
HARD ROCK
Tracks : 1.Unholy 2.Take it off 3.Tough love 4.Spit 5.God gave rocknroll to you II 6.Domino 7.Heart of chrome 8.Thou shalt not 9.Everytime I look at you 10.Paralyzed 11.I just wanna 12.Eric Carr Jam
www.kissonline.com
4 out of 5

By all means, Revenge is the album that Paul and Gene really wanted and tried to do with Hot in the shade but it failed on all areas. They needed an outside producer and who could be more suitable for the job than Bob Ezrin behind Destroyer, ok he also did their fiasco The Elder the band knew what we was capable of. Kiss spent 3 months writing for the album but threw most of it away, this time they wouldn´t go for the second best. Paul knew that Gene had mostly written only garbage for the last albums and told his longtime partner that the songs for Revenge would be the best stuff Gene has written since at least Creatures of the night. During the pre-recordings, Eric Carr started to get ill and was diagnosed heart cancer so the band knew pretty soon he wouldn´t be able to track drums for the album.

They tried Aunsley Dunbar but it didn´t work out so Paul called his old friend Eric Singer to try out, everything went very well and Singer became the new drummer. Eric Carr however did background vocals for the track "God gave rocknroll to you II" so he is involved in a small part of the making of Revenge. Eric passed away in November 1991 at the age of 41 and Kiss dedicated this album to him. He was a great drummer and stayed with the band for more than 10 years. I must say that this kick ass album is just what the fans wanted to hear, it shows Kiss with the same adrenalin as a heavy weight fighter and the same energy as a marathon runner.
I can´t even remember the last time a Kiss album opened with a Gene Simmons track but "Unholy" sets the pace here, gorgeous riffs and demonic vocals from the god of thunder. "God gave rocknroll to you II" is ofcourse one of the highlights along with "Spit", "Tough love", "I just wanna" and "Domino". The band hasn´t been this heavy since Creatures of the night!