Kiss - Rock and roll over 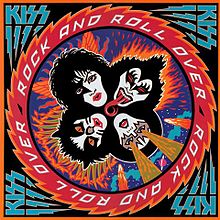 Kiss continued to deliver albums every six months and since Destroyer came out in March 1976, they band went into the studio in September 76 to record Rock and roll over. It took 2 weeks to record and Eddie Kramer who also produced Kiss Alive produced Rock and Roll Over, Kiss was scared after Destroyer even though it was so successful but they wanted to make a rocknroll record again and the fans hated Destroyer. Eddie had worked with Jimi Hendrix and Led Zeppelin before Kiss so he was perfect for the job on this album, they recorded it at Nanuet Star Theatre in New York which was partly owned by Frank Sinatra.
It´s a classic cover done by Michael Doret who also did the latest Kiss album Sonic Boom, some of Kiss best rockers are on this record such as "Makin love", "I want you", "Take me" and "Calling Dr Love" but my favorite track would become "Love em and leave em" by Gene Simmons. Not many people know that Katy Sagal from Married with children sang background vocals on the demo tracks by Gene. "Baby driver" was written by Stan Penridge and Peter Criss when they played together in Lips before Kiss, Paul wrote "I want you" at a soundcheck on the Destroyer tour and Paul also wrote "Hard luck woman" for Rod Stewart but Eddie Kramer wanted it on the Rock and roll over album and Peter insisted he should sing it so there it is. This is Kiss the way they should sound even though I loved Destroyer more.