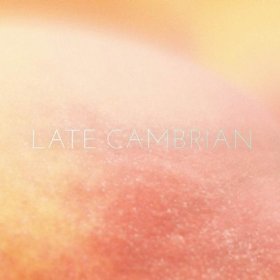 Late Cambrian - Peach (2013) Independent
Produced by Late Cambrian
INDIE ROCK
Tracks : 1.Lover´s point 2.The label needed a single 3.The year I cut the cable 4.The wolf 5.Patience on a monument 6.Made for love 7.Ryan Gosling 8.Poetry 9.Resolution 10.Recipe 11.Flowers from an anonymous 12.Hypnotica / Afternoon special 13.The luddite
www.latecambrian.com
3,5 out of 5

The 2nd album from Brooklyn based indie rock band Late Cambrian caught my attention straight away from the opening track "Lover´s point" and all through the album to the closing track "The luddite". They have been compared to bands like Arctic Monkeys, The Strokes and Phoenix but there´s more to this trio than being just another indie rock band from New York. They´re artsy, cool, quirky and blend new wave with bubblegum pop that has Nicky Chinn and Mike Chapman´s names written all over some choruses. At times, Late Cambrian bring thoughts to Adam and The Ants and in the next moment, I think of Bangles like in "The wolf" that sounds like a cousin to "Walk like an Egyptian". Other songs like "Ryan Gosling" and "Lover´s point" reminds a bit of Everclear meets Weezer.
Brendan Brown and Gabrielle Sterbenz from Wheatus are doing lead and background vocals on "The luddite" while Tracy Bonham is playing the violin on "Made for love", some major cool guest artists but let´s put the spotlight on the members behind Late Cambrian. Nunzio Moudatsos - Bass, O - Synth / Lead Vocals and John Wlaysewski - Lead Vocals / Guitars. They could be your new favorite band.