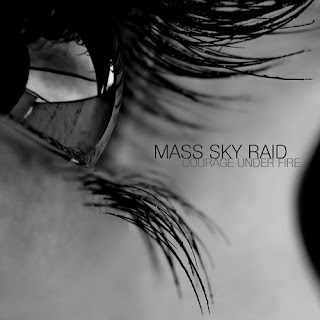 The bad side of the internet for artists is file sharing where it´s so hard to earn any money on selling your records but the good side is that bands don´t need labels any longer to reach out to fans. Because with internet sites such as Youtube and Facebook, you can connect with fans all over the world and build a loyal fan base and get promotion from various websites which would´ve been impossible 20 years ago if you weren´t signed to a record label that is. Take Mass Sky Raid for example, this is a brilliant unsigned band from the Gold Coast of Australia that recently self released their debut EP "Courage under fire". I bet the only expenses for this lovely rock band are the production costs and they have the ability to get their name out to the world thanks to bloggers such as myself. I´ve got the tip from my French buddy Philippe to check out this great band and they rock. Mass Sky Raid formed in 2011 and are influenced by bands like Dead Letter Circus, Thirty Seconds To Mars and Breaking Benjamin. I was completely taken by the opening track "Awake" but the band save the best for last with the amazing title track "Courage under fire", the only way to play it is LOUD!
Upplagd av RothNRoll kl. 6:05 PM