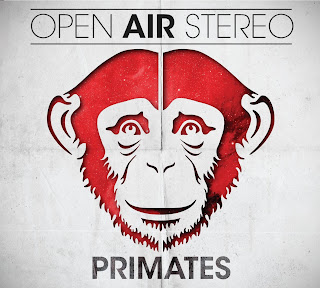 Open Air Stereo - Primates (2013) Goomba Music
Produced by Gavin Brown / Mike Plotnikoff / Peter Stengaard
POP / ROCK
Tracks : 1.Maurader 2.The right 3.Love is blind 4.Give me everything 5.Stuck on you 6.Damned 7.Where do we go 8.Hung over you 9.What you want 10.Living proof 11.Your way is my way
www.facebook.com/OpenAirStereo
3,5 out of 5

Southern California based pop/rock band Open Air Stereo has been working on their debut album for ages, they formed 11 years ago and got famous through the MTV series Laguna Beach. OAS signed with Epic Records but hit the writer´s block which can be a nightmare for any songwriter, they split for 3 years but reunited in 2011 to get that album finished and now it is. The result is the 11 track album "Primates" that shows a band that are willing to blend modern rock with hard rock riffs and feel-good pop, a large part of the writing is with Marti Frederiksen (Aerosmith, Def Leppard) and the potential hitsingles are lined up like children waiting for the ice cream man. We get the superb "The right", the new smashing single "Stuck on you" and my personal fave "Where do we go". Other highlights are the catchy "Living proof" that I reported about a year ago on my blog and the rocker "Hung over you", how can you not dig this?
Upplagd av RothNRoll kl. 6:08 AM