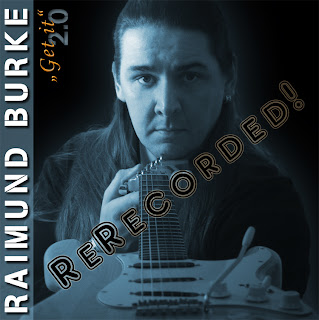 Raimund Burke - Get it 2.0 (2013) Independent
Produced by Raimund Burke
INSTRUMENTAL GUITAR ROCK
Tracks : 1.Come on 2.Sunny day 3.Dedicated to 4.Break through 5.Get it 6.Balance 7.Music speaks my mind 8.Friday night 9.The day before 10.It happened tomorrow 11.The typewriter
www.raimundburke.de
3,5 out of 5

When I reviewed German guitarist Raimund Burke´s 2008 album "Into my arena", I gave it 3,5 stars at melodic.net and thought it was a very entertaining guitar oriented rock album. This year he releases his first album again but completely re-recorded because he thought it needed a major face lift, Raimund wasn´t happy with the mix of "Get it" from 2005 and first wanted to remix it but then changed his mind re-recorded the whole thing. And just like "Into my arena", the music is a mix of fusion, hard rock and classical music. I also like this new version a lot and especially love the songs "Break through" that bring thoughts to Gary Moore meets Michael Schenker and the Jeff Beck-like "Come on". But I also want to give thumbs up to strong musical pieces such as "Balance" that has Ritchie Blackmore´s spirit all over it and the progressive "The day before". And oh, I almost forgot......the production is great so I think Raimund did the right thing.
Upplagd av RothNRoll kl. 4:31 PM