The Who - Endless wire 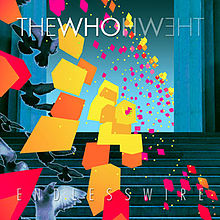 The Who - Endless wire (2006) Polydor Records
Produced by Pete Townshend
ROCK
Tracks : 1.Fragments 2.A man in a purple dress 3.Mike post theme 4.In the ether 5.Black widow´s eyes 6.Two thousand years 7.God speaks of Marty Robbins 8.It´s not enough 9.You stand by me 10.Sound and round 11.Pick up the peace 12.Unholy trinity 13.Trilby´s piano 14.Endless wire 15.Fragments of fragments 16.We got a hit 17.They made my dream come true 18.Mirror door 19.Tea and theatre
www.thewho.com
3,5 out of 5

There ain´t much to say about rock legends The Who that hasn´t been said, it was The Who and a few other bands in the 70´s that got me into music. Who didn´t wanna smash a guitar like Pete Townshend? or kick that drumkit like the maniac Keith Moon used to do and throw around the mic in the air like a lasso the way Roger Daltrey entertains his audience. But it was the thundering basswork of John Entwistle that made me choose the 4 string instrument, "My generation" was one of the first songs ever I learned to play on the bass. The Who´s performance at RockPalast in Germany 1981 is one of my favorite TV concerts and as the huge C.S.I fan I am - I also get to hear the classic Who songs "Baba O?Reilly", "Won´t get fooled again" and "Who are you" every week on TV.

Most people in the business know that Keith Moon died of an overdose in 1978 with Kenny Jones replacing him and in 2002, John Entwistle passed away at the age of 57.With that in mind, it feels pretty awkward to know that The Who releases a brand new studio album after 24 long years but to my surprise - it works! Pete Townshend has always stood behind the majority of the songs in the band and the voice of Daltrey is the main important thing to make these songs come alive. I miss the bassplaying from Entwistle but studio musician Pino Palladino is a good replacement on tour as well as on some tracks on "Endless wire".
The rest is handled by Pete himself and Stuart Ross on one track, you would expect Ringo Starr´s son Zak Starkey to be the drummer on this album since he´s The Who´s tour drummer but Zac was touring and recording with Oasis at the time Pete recorded EW. So, Peter Huntington plays on this album which contains the mini opera "Wire and glass" that features the new Who classics "We got a hit", "Endless wire" and "Mirror door".
The album opens with "Fragments" that reminds a lot of their C.S.I songs and the new single "It´s not enough" belongs on a Best of compilation, great song! It comes as a surprise but The Who in 2006 sounds a lot like their 70´s albums "Quadrophenia", "Who´s next" and "Who are you" but with a modern production.