The Who - Face dances 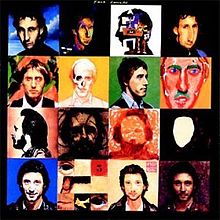 The Who - Face dances (1981) Polydor Records
Produced by Bill Szymczyk
ROCK
Tracks : 1.You better you bet 2.Don´t let go the coat 3.Cache cache 4.The quiet one 5.Did you steal my money 6.How can you do it alone 7.Daily records 8.You 9.Another tricky day
www.thewho.com
5 out of 5

Face dances is my 2nd favorite record with The Who, 1981 was the year when I finally saw a live concert with them on TV from Rockpalast, Germany and it was a fantastic show. They played songs like "You better you bet", "Another tricky day" and "The quiet one" from Face dances and I was hooked right away. I thought Keith Moon´s replacement, Kenney Jones from Small Faces did a mighty fine job even though I know it´s impossible to replace Moon. This album was a huge success in the states mostly because it was produced by Bill Szymczyk (Eagles) who gave The Who a million dollar budget sound but also because the songs are full of hooks. "Daily records", "You" and "Don´t let go the coat" are all just as good as any old Who classics. Daltrey thought Pete Townshend could´ve saved the song "Rough boys" from his 1980 solo album Empty glass for Face dances instead, ofcourse a dilemma for Townshend that wrote both songs for the band as well as his solo career.